This aircraft is currently being offered for salvage by GAB Robins with bids closing on 19-Jul-2012. It is offered "as is, where is" with the following known damage:

Right wing: spoiler broken and skin corrugated; leading edge of outboard flap cracked and skin corrugated; flap ruptured and skin corrugated; leading edge of inboard flap dented and skin corrugated; flap hinges bent; wing roots distorted; wing strut ruptured and deformed. Left wing: wing is deformed and there are cracks on its upper side surface; there is also extensive damage on the trailing edges of the wing, flap and spoiler; strut is deformed at its attachment to the fuselage. Fuselage: severely distorted, especially around the central fuselage at the unions of the wings and struts. Most windows on both sides are damaged. Empennage: vertical fin is broken and the horizontal stabilizer deformed Pontoons: right destroyed and the left deformed. Fuel System: damaged and contaminated. Hydraulic System: damaged and contaminated. Flight Controls: damaged and corrosion has started. Inspection is highly recommended as we do not warrant the above information and this aircraft salvage is being offered “AS IS WHERE IS” .

A .PDF document containing pictures of the aircraft is available at the following link:

The information pertaining to the sale can be found at:

Lastly, below is a picture of the aircraft prior to the accident occurring: 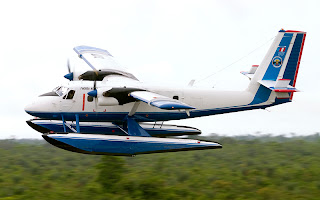