With thanks to Aviation Letter, the following update:


Fuselage noted hangared at the National Aerotech facility at Hampton, GA 15-Apr-2013; in primer and being rebuilt with cockpit section from donor airframe, MSN 510 (see below). This aircraft has been present at Hampton since at least 2009 and the registration N719AS was cancelled on 03-Oct-2011.


Fuselage noted hangared at the National Aerotech facility at Hampton, GA 15-Apr-2013; overall white c/s, wings located outside of hangar, and cockpit section has been removed for mating with MSN 139 (see above).
MSN 510 has been present at Hampton since at least Aug-2012 when it was noted outside, intact and with SVG Air markings, as seen in the photo below.
At the outset, I'm not sure of the actual original contributor of the information above, so I am only reporting what has been written. It would be interesting however, assuming that the engineering work described above is correct, to understand a bit more about the two airframes. The history of 139 is murky at best since 2003, but I am not aware of any accidents since its encounter with a ditch in Samoa in 1999 that would require a graft of the cockpit section. On the other side, I'm also not aware of anything having occurred to 510 that would make it a candidate to donate the cockpit section to another airframe.
Also remaining at Hampton is the fuselage section of MSN 186, N186AL in the same state as noted in the photograph below. This aircraft has been grounded since 2009. 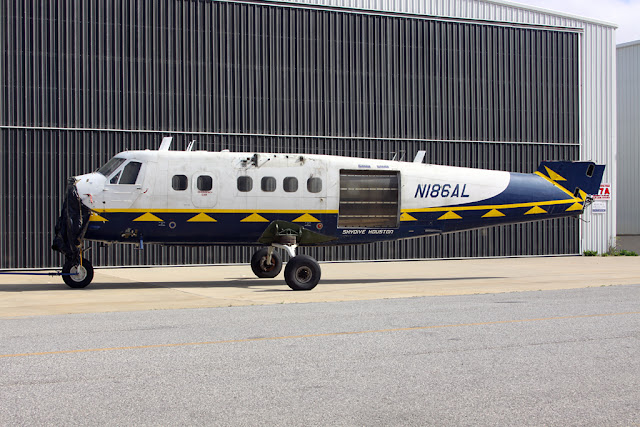