Skybus will move their Twin Otter operation from Land's End to Newquay as a result of upgrade work to the grass runways at Land's End occurring from 04-Jul-2014 to 20-Jul-2014.

In a ceremony yesterday (17-Jun-2014) at Cam Ranh Bay the Vietnam People's Navy handed over the DHC-6 operation to the new Air Brigade 954 under the command of Rear Admiral Le Minh Thanh. The DHC-6 squadron was originally established on 05-Sep-2013, and aircraft were previously tasked by the Vietnam Ministry of Defence. 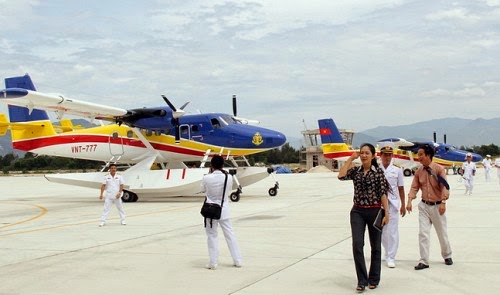 The Indonesian National Transportation Safety Committee (NTSC) has released their official report on the above accident which took place on 05-Feb-2013. This was the second incident for PK-YRF in as many years - on 08-Apr-2012 the aircraft collided with airport buildings at Mulia after both pilots were injured by gunfire from the field perimeter.